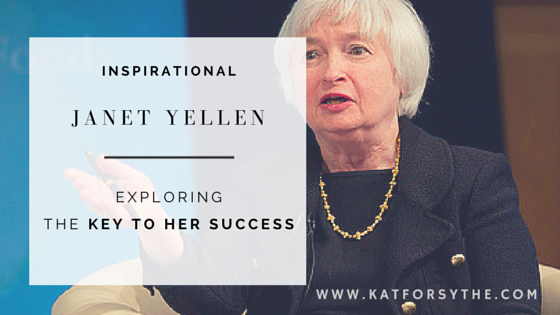 At 67, Janet Yellen runs our money.  She’s the first woman in U.S. history to chair the Federal Reserve, taking Ben Bernanke’s place at the helm, appointed October 2013 by President Obama.  In a man’s world of economics and monetary policy, she’s steadily and consistently risen to the top.  Her love of life NOW expresses itself through her tenacity to “do the right thing,” uncluttered thinking and quiet brilliance.

Respected by men and women equally, her dossier reads like a dream sheet of intellectual and professional accomplishment: Brown University 1967 and Yale University PhD 1971.  Janet has taught at Harvard, London School of Economics, and UC Berkeley.  Needless to say, she was valedictorian of her high school graduation class… and that’s just the academics!

She spent a majority of her career in leading roles at the Federal Reserve starting in late 1970’s through today.  In 2004 she was president and CE0 of Federal Reserve Bank of San Francisco, not to mention becoming vice chair of the U.S. Federal Reserve in 2010.

On top of all these accomplishments, she’s been married to the same man, George Akerlof, for four decades.  She’s a Mom too – with one grown son.

Janet Yellen personifies Love Your Life Now, Step 2: ADJUST (among others) in our 6 Steps to Loving Your Life Now.  The key to her success is to remain flexible and open to new information at any moment – ready to adjust your position.

President Obama praised her because “she knows how to build consensus.”  Of course she does!  She’s a woman – and like the rest of us, she knows that it’s all about the relationship. She’s been building consensus all of her life – in and out of business.

Please leave a comment and don’t be shy about recommending other women over 50 for us to honor!

Starting Over After 50: Getting into bed with the dating game
Scroll to top